Hosts  like to say that Home Sharing is as old as the story of Mary and Joseph in Bethlehem. Actually it is older. It occurs to me that the subject of receiving guests at one’s home, and the theme of hospitality, must be a theme in many an ancient myth. So I set out to find some. Empanada was the Roman Goddess of Hospitality:

And Nephele was the Greek Goddess of Hospitality: 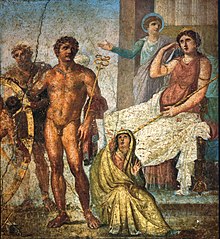 Nephele is the seated figure here

As well,  Zeus in his role as Zeus Xenios was the protector of travelers. In the Odyssey, we read:

Zeus is the protector of suppliants and guests
Zeus Xeinios, who attends to revered guests

Xenia (Greek: ξενία, xenía, trans. “guest-friendship”) is the ancient Greek concept of hospitality, the generosity and courtesy shown to those who are travelers who’ve wandered far from home, or who may be the associates of the person bestowing guest-friendship. The rituals of hospitality in Greece created and expressed a reciprocal relationship between guest and host expressed in both material benefits (such as the giving of gifts to each party) as well as non-material ones (such as protection, shelter, favors, or certain  rights).

The Greek god Zeus is sometimes called “Zeus Xenios” in his role as a protector of travelers.  He represented  the religious obligation to be hospitable to travelers. Theoxeny or theoxenia is a theme in Greek mythology in which humans demonstrate their virtue or piety by extending hospitality to a humble stranger (xenos), who turns out to be a disguised deity (theos) with the capacity to bestow rewards. These stories caution mortals that any guest should be treated as if they were a hidden divinity and help establish the idea of xenia as a  Greek custom. The term theoxenia also covered entertaining among the gods, a popular subject in classical art, which was revived at the Renaissance in works depicting a Feast of the Gods.

(1)The respect from host to guest. The host must be hospitable to the guest and provide him/her with food and drink and a bath, if required. It is not polite to ask questions until the guest has stated his/her needs.
(2) The respect from guest to host. The guest must be courteous to the host and not be a burden.
Xenia was considered to be particularly important in ancient times when people thought gods mingled among them. If one had poorly played host to a stranger, there was the risk of incurring the wrath of a god disguised as the stranger. It is thought that the Greek practice of theoxenia may have been the antecedent of the Roman rite of Lectisternium, or the draping of couches.

While this particular origin of the practices of guest-friendship are centralized around the divine, however, it would become common practice among the Greeks to incorporate xenia into their customs and manners for very much all of ancient Greek history. Indeed, while originating from mythical traditions, xenia would very much become a standard practice throughout much (if not, all) of Greece as customarily proper in the affair of men interacting with men as well as men interacting with the Gods. 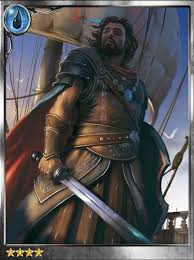 Xenia is an important theme in Homer’s The Odyssey. Every household in the epic is seen alongside xenia. Odysseus’ house is inhabited by suitors with demands beyond the bounds of xenia — in other words, RUDE GUESTS!. Menelaus and Nestor’s houses are seen when Telemachus visits. There are many other households observed in the epic, including those of Circe, Calypso, and the Phaeacians. The Phaeacians, and in particular Nausicaä, were famed for their immaculate application of xenia, as the princess and her maids offered to bathe Odysseus and then led him to the palace to be fed and entertained. It should be noted, however, that because Odysseus was indirectly responsible for Poseidon’s sinking one of their ships, the Phaeacians resolved to be less trusting of subsequent travelers. However, Polyphemus showed lack of xenia, despite Odysseus reminding him of it, and refused to honor the travelers’ requests, instead eating some of Odysseus’ men. BAD GUEST!!   The suitor Ctesippus mocks xenia by hurling a hoof, disguised as a ‘gift,’ at Odysseus. When he is speared by Philoetius, the cowherd claims this avenges his disrespect. Book 1 has Telemachus showing xenia to the disguised Athena. Eumaeus the Swineherd shows xenia to the disguised Odysseus, claiming guests come under the protection of Zeus. When the leading suitor Antinous throws a stool at the disguised Odysseus and strikes his right shoulder as he asks for food, even the other suitors are worried, saying Antinous is ‘doomed’ if the stranger is a disguised god. As well as this, whenever Homer describes the details of ‘xenia,’ he uses the same formula every time: for example, the maid pouring wine into the gold cups, etc.

In the Odyssey, Calypso had wanted to keep Odysseus in her cavern as her husband, but he refused. Circe had also tried to keep Odysseus in her home, but her attempts failed as well. Although both these women had homes and much to offer him, their hospitality was too much for Odysseus. He instead left each with the goal of returning to Ithaca and reclaiming his family and his home. Sometimes Hospitality was unwanted or was given unwillingly.

Historian Gabriel Herman lays out the use of xenia in political alliances in the Near East.

Solemn pronouncements were often used to establish a ritualised personal relationship, such as when “Xerxes, having been offered lavish hospitality and most valuable gifts by Pythios the Lydian, declared “…in return for this I give you these privileges (gera): I make you my Xenos. …the same set of words could be applied in non-face-to-face situations, when a ruler wished to contract an alliance through the intermediary of messengers.” Herman points out that this is correspondent to pacts made by African tribal societies studied by Harry Tegnaeus (in his 1952 ethno-sociological book Blood Brothers) where “the partners proclaim themselves in the course of the blood ceremony each other’s ‘brothers’, ‘foster-brothers’, ‘cousins’. The surviving treaties of ‘fraternity’ ‘paternity’ and ‘love and friendship’ between the petty rules of the ancient Near East in the second half of the second millennium B.C. incorporate what are probably written versions of such declarations.” (Herman also sees an echo of this in the medieval ceremony of homage, in the exchange between a would-be-vassal and the lord.)

Herman goes on to point out “No less important an element in forging the alliance was the exchange of highly specialized category of gifts, designated in our sources as xénia (as distinct from xenía, the term of the relationship itself) or dora. It was as important to give such gifts as to receive, and refusal to reciprocate as tantamount to a declaration of hostility. Mutual acceptance of the gifts, on the other hand, was a clear mark of the beginning of friendship.” Herman points to the account of Odysseys giving Iphitos a sword and spear after having been given a formidable bow while saying they were “the first toke of loving guest-friendship”. Herman also shows that Herodotus holds “the conclusion of an alliance and the exchange of gifts appeared as two inseparable acts: Polykrates, having seized the government in Samos, “concluded a pact of xenia with Amasis king of Egypt, sending and receiving from him gifts (dora)”. Within the ritual it was important that the return gift be offered immediately after receiving a gift with each commensurate rather than attempting to surpass each other in value. The initial gifts in such an exchange would fall somewhere between being symbolic but useless, and of high use-value but without any special symbolic significance. The initial gifts would serve as both object and symbol. Herman points out that these good were not viewed as trade or barter, “for the exchange was not an end in itself, but a means to another end.” While trade ends with the exchange, the ritual exchange “was meant to symbolize the establishment of obligations which, ideally, would last for ever.” 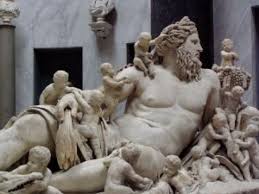 Hospitality in other ancient societies

In ancient Ireland, hospitality was not only a courtesy, but a legal requirement, and the inhospitable were bitterly criticized. (Hospitable God: THe Transformative Dream, pg 31) With the coming of Christian Monasteries, guest houses were created for guests. Welsh folklore reflected an equally high estimation of hospitality, and Julius Caesar, traveling in Teutonic lands, recorded the serious demands of hospitality among the Teutons, as did Mauricius among the Slavs.

In the Slavic Lands, Ragegast was the deity associated with hospitality:

Ivan Hudec, in his book, “Tales from Slavic Myths” (page 104) says that in ancient times, Prince Helmhold wrote this in the Slavic Chronicle (or Chronica Slavorum, written by Helmhold in the 12th century) :

There are no other people like the Slavs for extending their hospitality to strangers.

Hudec says that the Slavic people were extremely generous to their guests, and didn’t wait for guests to request something before offering it.  He says that “if a member of the Slavic community was exposed as reluctant to welcome a stranger at his home, such a host could expect to have his abode set on fire. Moreover, those reluctant to offer hospitality would be “condemned in public for having denied bread to a stranger.”

Of course, this was long ago, in days before hotels existed, and when travellers relied more heavily on the hospitality of those whose regions they passed through, than is the case today.  And though the hospitality we refer to in this article was given without expectation of compensation in exchange, it remains true that welcoming “strangers” into one’s home, whether they are paying guests or not, is a form of hospitality which has its connections and  roots to these ancient times.

One thought on “Xenia and Theoxeny”